Scenario: You have one MikroTik  RB250GS switch running 802.1Q vlans and you want to extend all or some of those vlans to a second switch. The following diagram borrowed from a post by Ozelo explains:

The configuration of the first switch (192.168.88.1) is explained in a previous example 802.1Q Router on a Stick Example. The main change to that example is the configuration of port ether5 since we want it to pass all the vlans to the second switch. The two pales you need to make changes are the VLAN tab and the VLANs tab. Confusing, yes but note the “s” on VLAN on one tab.
Configure the first switch as follows:

Then configure the second switch as follows. Please note we have set the IP address of the second switch to 192.168.88.10 so as not to duplicate the witch 1 IP address. This is done on the System tab. In case you ever wonder why there is no setting for netmask or default gateway, that is because the switch does a little magic in determining the source of the packet and returning it to the host without the need for those two pieces of information.

All that remains is to create the vlan interfaces on the router and assign IP addresses, DHCP server, etc. to them. Here is a screen shot of the router used for this example, interfaces and IP addresses. The IP here is the one being used to manage the switches: 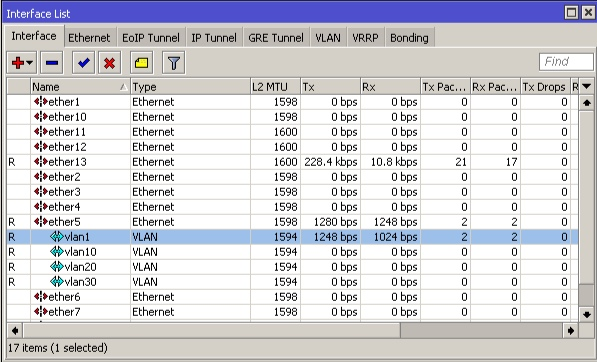 That is it, you should now have two switches trunked together passing vlans to the second switch.